Wikipedia says: “Bobby Fischer’s goal was to eliminate what he considered the complete dominance of openings preparation in classical chess, replacing it with creativity and talent. … Fischer believed that eliminating memorized book moves would level the playing field.” The game became known as Fischer Random Chess but in 1991 it was changed to Chess960 and is gaining in popularity (as is noted at chessbase.com).

“Life is Chess & Chess is Life” – It’s been said that a Chess Master will win most chess variants because of having more experience. That is true even in life as you gain more experience. 960 is great! It mimics real life.

“3D Chess960” would be the same as Chess960 but it would be played on two boards as in “CHESS – THE NEXT GENERATION“. Plus there would be 16 opening moves (that does not exist in regular 2D flat board game) and without the predefined possible classic openings. 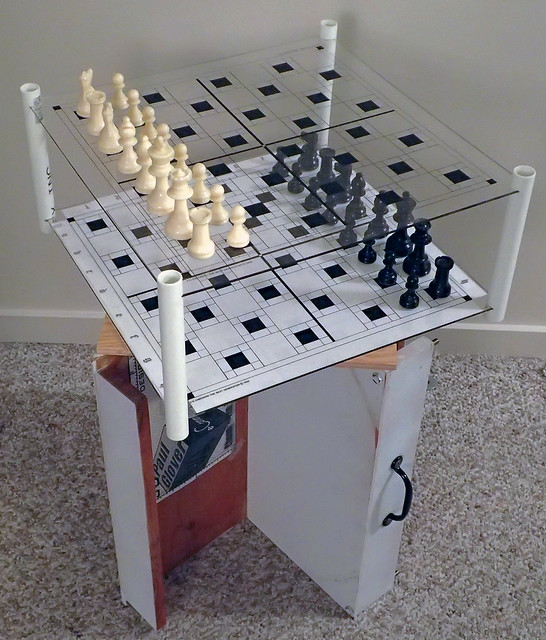 The above pieces have already been placed randomly and there are still 16 possible opening moves that would have never happen in a flat board game. This really mimics real life! bringing out the best of your creativity and talent.
If you have those red/cyan 3D glasses, then take a look at 3D-Chess960 in 3D

The pieces are randomly placed on the back row, with the pawns on the next row, as usual. There must always be:

The starting positions are always symmetrical (as in regular chess). … … For casual play, it’s simple to set up a valid position by hand.

How to Castle in Chess960

First, as explained at Wikipedia, it’s the same rules as in regular chess:

Castling prerequisites are the same as in standard chess, namely:

It also states: A recommended way to castle is always move first the king to its final square, then move the rook to its final square. … also useful for the player to state “I am about to castle” before castling.
Castling(3.5mins spells it out so simply and visually):
chess 960 (Fischer Random) Castle rules
Chess.com says: The bottom line is that the King and Rook end up on exactly the same squares as they would in a standard game.

So what would a game of Chess960 look like? Click on the game below and it will begin playing out in about 10 seconds.

The tools I used to create the above game:

In order to record a game of 3D Chess960, use the Chess Notation as seen above plus add the board level in-front of the notation so that it would look like: Aa1 – Ba1 (if a Rook was on that square moving down). The top board level is A, which is above the 2nd board below it, B.

To take this game to whole new fair level, take Bobby Fischer’s goal and multiply it by 2 and what you’ve got is Chess960 x2 or both back rows are randomized according to the rules of Chess960. This also would require playing two games, so that both players would play the same – randomized back row of the other person. This is the end result of just the first game (click game board – the game starts to plays out in 10 seconds):

The above game plays out in 3 minutes.

Now, take the above and play a game of “3D Chess960 x2” and you’ve got a very exciting fair game with endless fair possibilities so that each game will be very new.